How might the words of a 13th century Persian poet guide us through the Corona crisis?

The sun's corona, the crown that encircles it, is normally visible only during a total solar eclipse. What might come into view during this dark time for human beings? Maybe Rumi’s poem ‘The Guest House’ offers the ultimate challenge for these times: embrace it all and it may clear you ‘for some new delight’. Do we have the courage and creativity to open the door in this way?

This being human is a guest house.

Every morning a new arrival.

A joy, a depression, a meanness,

as an unexpected visitor.

Welcome and entertain them all!

Even if they’re a crowd of sorrows,

who violently sweep your house

empty of its furniture,

He may be clearing you out

for some new delight.

The dark thought, the shame, the malice,

meet them at the door laughing,

and invite them in.

Be grateful for whoever comes,

because each has been sent

as a guide from beyond. Rumi

The profound truth of Rumi’s poem has been increasingly liberating to me personally and in my work as an NHS psychotherapist and mindfulness teacher. In my experience a breakdown inevitably carries the potential of a breakthrough. What usually breaks down is an old coping style that no longer works for us. The style that was used to solve a problem and has now become the problem.

The experience of the breakdown is usually frightening, shattering old patterns and familiar structures, facing us with uncertainty and the unknown. It can feel like a failure, a problem that needs fixing where we desperately use old styles to solve it. For example if we have always been fighting it could be time to surrender!

But conversely, as Rumi suggests, what if we can learn to welcome the breakdown? To approach it completely differently it not as a failure but as a creative process and, instead, give our attention to what is breaking through.

Each crisis seems to bring what is needed for the change to occur. It is not what we want but what we need, as though we are unconsciously participating in the design.

For example when my wife had both hips replaced, she was on crutches for eight months. When we looked back on a very tough time, she had learnt to let go of a fierce independence and ask for help and I had learnt how to take care of her and myself at the same time to avoid burning out.

In a crisis the fighter can discover that although they are winning all the little battles they are losing the war. Now they need to learn to retreat or give way, the opposite to the now habitual reaction they have employed all along. For the person whose style has been hiding or withdrawal they may be forced into the open. The breakdown of the false self reveals the hidden true self.

We only have to look at the natural world to see this is not a cosmetic process: The caterpillar breaks down to liquid in the chrysalis before its emergence and transformation.

The current global Corona pandemic crisis mirrors what happens on an individual micro level. The effects are catastrophic and the suffering for millions on a functional level is vast.

We could attempt to patch things up when it has passed and revert to old patterns or we could, as Rumi suggests, embrace the breakdown of these old styles and allow the breakthrough of a more natural way of being.

Similarly in the global picture can we allow the pandemic to take us out of our comfort zone? Eckhart Tolle in ‘A New Earth’ compares this to the fish leaving the sea, ‘where it could live with much greater ease’ to be instead on dry land. He goes on to say:

It seems unlikely that a species would venture into such an alien environment and undergo an evolutionary transformation unless it was compelled to do so by some crisis situation.       Eckhart Tolle, A New Earth

The effects of the pandemic is already giving us glimpses of what this breakthrough might look like and how it could possibly revolutionise modern living across the globe.  An encouragement to resist the temptation to ‘go back to normal’ and to allow this guest to wake us up from our complacency. 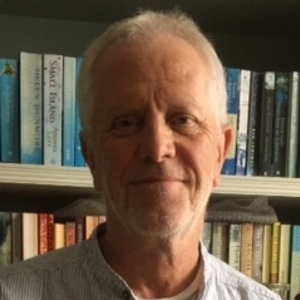 I have worked in the NHS in the UK for over 30 years, as a consultant psychotherapist. I teach mindfulness and practice psychotherapy from a non-dual perspective. I have led retreats in England, Scotland, the USA, Goa and Spain My book 'Sitting in the Stillness' was published by Mantra books in February 2020: https://www.johnhuntpublishing.com/mantra-books/our-books/sitting-in-stillness
Follow
Life Labs