Wake Up taking a bite out of the Big Apple

I have lived with Sarah for over twenty years but I can’t get away from the fact that there has always been another man in her life, some American fella called Bruce. In her eyes I will never come up to his standards in any way you can think of except I’m a ‘comedy genius’ and he isn’t – fact (honest)!

I have never been under any illusion that she loves him more than me and she would tell you that herself if you asked her. She might have married me but she has always loved him just that little bit more and the thing is I can accept this. He came into her life years before I met her and he’s never really let her down were I have, I know that. Anyway earlier in the year she asked me, politely, if it was possible for her big birthday (40, ahem) to go to New York to see him. What could I say?

In the twenty plus years we have lived together she has seen him nineteen times. Although I will admit I have been with her on sixteen of those occasions and no funny business has gone on apart from her loved-up looks of adoration but no funny business that’s for sure. She has seen him in Germany, Paris, Ireland and Wales! She has seen him all over the UK from Sunderland to Glastonbury to Hyde Park. Yes people if you haven’t guessed it already she loves the Boss, Bruce Springsteen!

This concert was the big one in many ways, watching him live in Brooklyn. This was the gig that meant so much to Sarah. She said, “After I’ve seen him in New York I can die happy because I’ve done all the things I wanted to.”

I thought this was a bit of a dramatic statement but I understood what she meant. So like the dutiful husband I am, ahem, I made it happen.

Now for most people a visit to the Big Apple would be anything from a great break to a chance in a lifetime. But because of this amazing year in ‘wake up’ and because fourteen years ago we went to New York and I bled it dry for all it was worth, this was for me the same as going to the shops for a carton of milk. Okay, I jest but because of ‘wake up’ and the year I was having, I decided to do New York ‘wake up’-style. This meant going to New York and instead of rushing around Manhattan and Brooklyn like a tourist on heat I decided to breathe in the beauty of the place, feel its energy and pulse, connect with it, admire it for what it is and what it stands for.

When I was growing up I only ever wanted to visit one place abroad - New York. One of my favourite TV shows of all time; Kojak was based there and most of the films I thought were great and still think are great were set there, too many to mention. When I finally got there fourteen years ago with Sarah it was a dream come true. It was like being on a film set. New York is a truly great place to visit, it has everything.

Although it was a great place I never thought I’d go back again because I don’t like visiting the same place abroad twice. This is because I feel I would compare and contrast the different visits and I never want to do that because it could tarnish the memories of one of the visits. And besides I’d had my fill of New York.

When I visit somewhere I try to open up to it and try to find a connection with it and absorb it in every way possible. New York was easy. I’d been up the Empire State Building, ate a hot dog in Central Park, seen Times Square, the Rocker Fella centre, Radio City, Grand Central, admired the Chrysler building and Flatiron, visited Liberty Island, Ellis Island, dined in China Town, ate a pizza in Little Italy, been on the Subway, wandered around Greenwich Village, drank in a ‘bar’, ate at a sandwich shop, shopped at Tiffany’s (I bought nothing I couldn’t afford it) and Macy’s (I bought coffee), watched the sunset on the Staten Island ferry, dropped my trousers in an elevator (that was another story, ahem), visited the Guggenheim, visited Ground Zero, went to a New York Yankees game – I absorbed it all. But this time was going to be different. Yes we had the concert but I decided and Sarah agreed to really ‘feel’ it - The Great Wake Up way.

Now when I go on vacation (did you like that?) I try to see and experience all the sites. To complete this task I always make an itinerary, visit and chalk it off, I don’t want to miss a thing. This time though I just chilled and breathed and tried to capture New York in a way I wouldn’t have tried to before – all thanks to what I was going through in ‘wake up’. And that’s what I done; I connected deeply to it. I smashed the pre-planned tourist auto pilot mode, sacked the sightseeing and just energised with it, breathed it, embraced it, indulged with it, connected to it, touched it, reflected with in it, stole time from it, lived it and I listened to my body clock too.

Sitting on a bench on Coney Island boardwalk looking out to sea in silence and reflecting might not be everybody’s idea of experiencing New York but it was a magical moment for me. Watching New Yorker’s in Central Park on a Sunday afternoon playing soft ball for hours on end, observing the way they ‘do’ things was uplifting. Even sitting watching the ever developing madness of Times Square, I could have been green with twenty eyes on stalks and tentacles for arms and yet no one would have noticed or cared more or less. But that was good too. And in amongst the city that never sleeps I found some things napping, they made me laugh out loud. Yes it is a crackpot place; an adventure playground for kids that never grew up even though the lines on their faces show their true age. But in amongst the madness, my ‘wake up’ experiment was still thriving and I was still learning.

So what about the concert you might ask? It was nearly four hours long and Sarah said it was the best concert she’d ever been to and a kiss on the cheek came my way – happy days all round. Thanks New York, thanks Bruce, thanks Sarah and thanks to Chris for ‘wake up’. 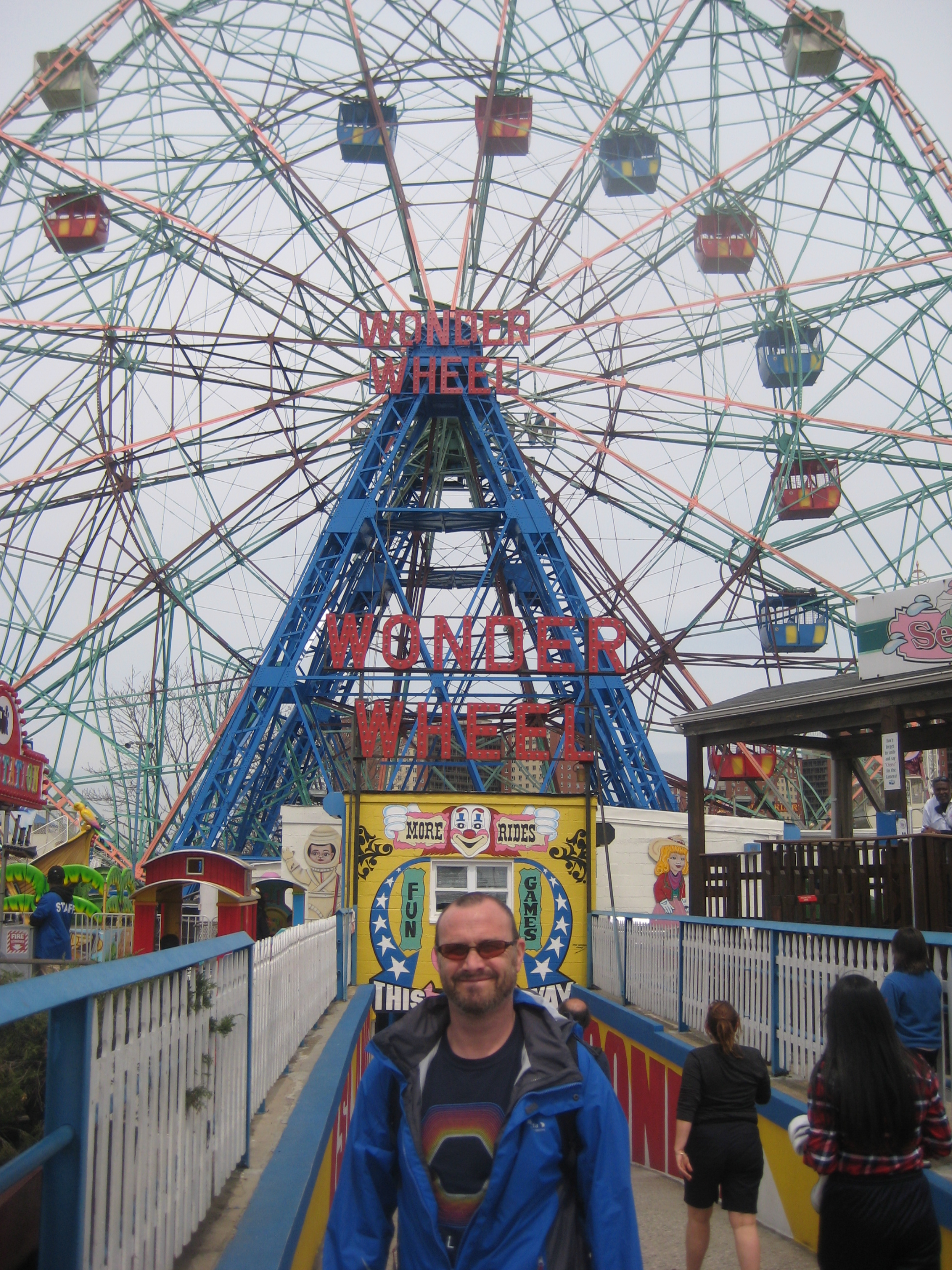 (Hope you like the photo of a man in ‘wake up’ by the famous Wonder Wheel at Coney Island, all thanks to Sarah and her camera - Go Wake Up! as they say in the States).

Jacqui over 4 years ago

Vanessa over 4 years ago

Sounds fab! One of my favourite Wakefield Up words is flânerie and you are one fab flâneur!

Vanessa, I've never seen myself that way but thanks for the complement (at least I hope it is one). I would have bought the 'wake up' family some great gifts but I still have stuffocation on my agenda - sorry guys (I can't stop saying these American sayings - Vanessa help me out here, please). And Jacqui, it was top dollar (D'oh there I go again!) I'm turning all American Vanessa. Here comes the star spangled banner... or maybe not (I don't know the words!) Ha, ha, New York it's another planet and I'm fighting this jet lag for a few more hours - yeah, yeah! Go Mark (STOP IT).

Vanessa over 4 years ago

Any time you need help, Mark, just reach out ;-)

Chris Baréz-Brown over 4 years ago

What a great post and loving the NY vibe! Thank you Mark for always sharing such insightful feedback. Big love, C x

Cheers Chris if it wasn't for 'waking up' I would have just done the tourist bits again and missed out on a true connection to the place (including all the bits that made me go "ouch!") and Vanessa I love the positive outlook of the US people, their outlook on life and success is far brighter than the UK's in general in my honest opinion - period (I'm at it again, ahem, somebody stop me, I'll be wearing a baseball cap backwards and calling everyone "Bro" next).

Ffi Ffi Trixibelle over 4 years ago

Really enjoyed this post.. lucky Sarah and mahoosive brownie points for you in the bag... NY is on my wish list but never been brave enough to go, but maybe for my next big birthday ? I'm going to Berlin next weekend and although I booked it months ago before Wake up it's kind of crept up on me. After reading your post you have encouraged me to visit the place with my eyes open. Thanks for your blogs they always make me giggle and always an interesting read.

Cheers Fi, if you do decide to go to New York please let me know and I can give you some great advice (and warnings - it can be a big scary city for some) because the guide books don't really help as much as you think they would, trust me I'm a fab flaneur according to my 'wake up' family American cousin Vanessa. I hope Berlin is as good as they say it is. All the best and have a fang-tastic holiday.

Why These Organic Foods Are Worth Investing In
360me, The Happiness Club , The Great Wake Up

Why These Organic Foods Are Worth Investing In

Nicki Williams
Migraines; common triggers and natural approaches
360me, The Happiness Club , The Great Wake Up