Menu
Brought to you by Psychologies
The Happiness Club

A moving story of true Resilience. The winner doesn’t always take it all!

This month’s blog is going to be focused on one Happiness Club member’s past month. It feels only right, as this month she opened her home, and heart, to a Kenyan runner. The experiences they shared show what true resilience is.

Debbie’s husband, Jamil, is a runner and coaches other runners. He had built up an online relationship with Jackson and invited him to stay with his family so that he could coach him face to face and so Jackson could enter a local marathon and win first prize of £2,000; a life changing amount of money. Jackson lives in a rural village in Kenya with 4 cows and chickens from which to earn a living and he took up the opportunity, unaware of what to expect in terms of cultural differences, living with someone else’s family or even running on different ground.

Debbie and her family felt similarly apprehensive beforehand about welcoming a stranger into their home for 4 weeks (Debbie has two children aged 8 and 10). It’s a busy life and Debbie wanted to be a good host but also knew that she had a lot of other priorities in her life.

Within two days of arriving Jackson ran his first short race, just a 10k race, in which he should have come 1st and won £500. As a marathon runner, they saw this as a mere warm up. As Debbie and her family waited at the finishing line to celebrate his glory, waving their Kenyan flags, the winner ran towards them - but it wasn’t Jackson. Jackson came a short time later, clearly in pain. He’d never run on concrete and had torn a ligament from the impact!He won £200. With only two weeks to the big race their concern grew. Luckily friends pulled together and helped Jackson receive the medical help he needed and he became strong enough to run the marathon.

For 4 weeks, Jackson enjoyed the delights of living with Debbie’s family. He ran his fingers across the radiator “Tell me again how this works.” He had his first bath and was so excited he invited the whole family in to see him (lots of bubbles luckily) and commented with a big smile “I never imagined that this could happen to me.’He put the word ‘good’ into lots of different sentences; “How long have you lived here, Debbie?” “11 years” and then with a smile and a point of his finger, Jackson said “11 good years.” The same when Debbie was asked “how long have you worked where you do?” Her answer “12 years” was corrected with a smile “12 good years.” Every time Jackson met Debbie and her sons in the house, he asked with a shake of their hand “How are you?” and he noted on how briefly she greeted even good friends that she met in the street – “so friendly, but so busy”.

Jackson also had the wonders of a modern kitchen to contend with. Debbie had put dirty cups and plates in the dishwasher, assuming Jackson knew what this was. Jackson thought it was another cupboard and Debbie soon realised he was using the crockery from the dishwasher when he needed something, even if it was still dirty.Jackson walked around the local town in awe that all the buildings were made of concrete and asking often where the electricity came from.

Once, after talking over some news with Debbie, she suggested to Jackson that he talk to Jamil to get a different perspective. Jackson immediately did, even though Jamil was in the bath! Debbie heard a gasp of surprise from her husband but then the bathroom door shut as Jackson settled himself down and chatted away!It highlights what superficial boundaries we have. I think it’s really moving that someone can be so comfortable with other people’s bodies instead of being embarrassed by them - something we all learn to be in this country.

A few days before the big marathon race they received news that an international marathon runner, who was faster than Jackson, had made a last minute entry into the race and was flying over from Kenya.Having only ever run one marathon before, they knew Jackson was now unlikely to win, which was the reason he’d made the trip. The money was important; Jackson’s parents had both died in a car crash when he was young and he’d been raised by another family member. The small farm he inherited was all he had.Determined to win the race Jackson set off as fast as the other runner, trying to match his pace, but he obviously couldn’t sustain this and tired more quickly. Jackson came 3rd, winning £300. (I would just like to emphasise that is 3rd out of approximately 7,000 runners).

Debbie’s family were sad that Jackson had not won the £2,500 they’d hoped for, but Jackson himself showed only gratitude for what he had won. His £500 would buy him two more cows, some chickens, a small fridge and pay his rent for a year! It was still an amazing amount of money.“I hope you all live to be 300” he said, “for the opportunity you have given me”. Their shared time together outweighed any disappointment - Jackson had become a part of the family.

The day after the marathon Jackson received a message to say that in his absence, a relative had built a house on Jackson’s farm and was now declaring Jackson’s land as his own. I can’t imagine how scary this must have been. Jackson had to contact friends from his home village to put things right and even tried to rearrange his return flight home to sort things out, but the cost would have been £525 – everything he’d won and worked for. This was another test of resilience for Jackson - to trust that things would work out, as he waited a further 8 days to see for himself.

Debbie’s experience of hosting Jackson was also life changing. She became aware of how busy her life is, how all the family have lots of different commitments and rarely stop and rest together. The essentials we live with didn’t feel as essential any more. Welcoming Jackson into her home changed the atmosphere and created a greater sense of calm and contentment.

I wanted to blog about this story because for me it puts things into perspective. Certainly when I had a hole in my bread today making my lunch and when I went to get in my washing from the line, which had just been heavily rained on, I barely made a grumble. For me, I feel like my month of resilience is going to start again now. I feel humbled by Jackson’s story and I feel proud of my friend Debbie, and her family, who are so generous and inspiring.

Here’s a photo of Jackson with me: 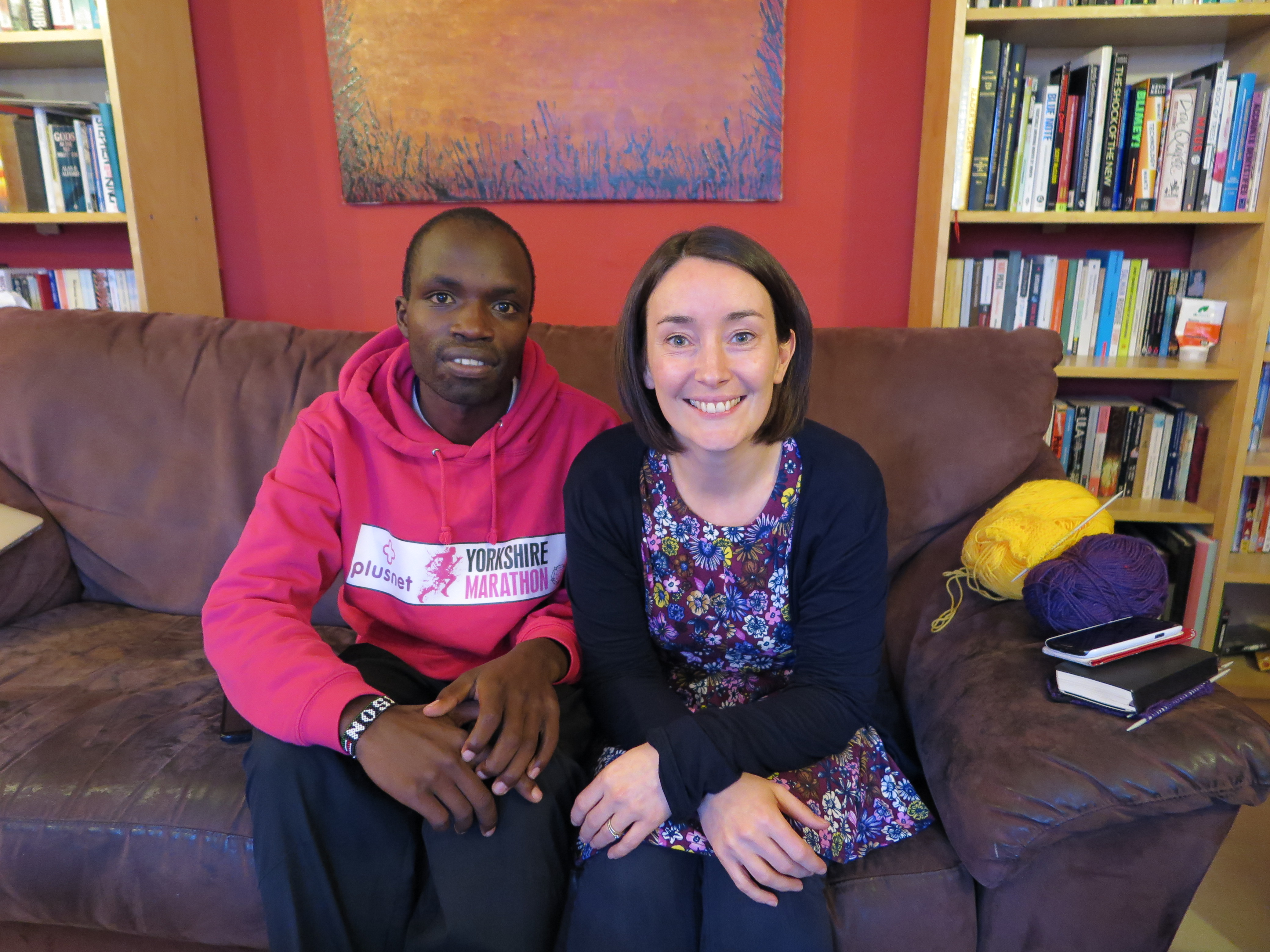 Live life and love life - Coming up – the month of positivity

Back to The Happiness Club
Next

I am a Chartered Accountant for a Housing Association, who is a mum to 2 small children. I discovered Mindfulness in 2013 and this was a turning point for me to really be committed and present wherever I am. Life isn't as worrying as I used to think when I used to listen to all my 'what if' thoughts and I now feel braver and more confident. I set up a Happiness Club in 2015 in conjunction with Psychologies magazine and as with Mindfulness am already loving the difference it's making to my life and those around me.
Follow

Amanda Alexander about 4 years ago

What a great blog...hope that money comes to Jackson. Did the house and land thing get sorted?

Amanda Alexander about 4 years ago

What a great blog...hope that money comes to Jackson. Did the house and land thing get sorted?

Kirsty Morgan about 4 years ago

Thank you Amanda. Yes it did get sorted and I heard only last week that when the money he did win from the race came through Jackson bought 150 chickens and is making money selling their eggs. So a happy ending after all.

Take seven steps towards a brighter future
Barefoot Coaches' Channel , Self, How To Save Your Relationship, The Happiness Club , Work, How To Achieve Your Goals, Family & Relationships , Women in Business Expo TV, Barefoot Coaches Training Room

Beverly Landais PCC
Discover your ideal life!
Self, 360me, The Happiness Club , The Great Wake Up, Work, How To Achieve Your Goals, Money

Kia Cannons
6 surprising health benefits of mindful eating (and how to get started)
Self, 360me, The Happiness Club , The Great Wake Up

Nicki Williams
4 ways to help you connect with others
Barefoot Coaches' Channel , Self, Sex, How To Save Your Relationship, The Happiness Club , Work, How To Achieve Your Goals, Money, Family & Relationships , Happiness Book Club , Women in Business Expo TV, Barefoot Coaches Training Room

4 ways to help you connect with others