I was told at 15 I was not clever enough to be a Physiotherapist. Today I own an award-winning multi-healthcare centre. Here is my story...

I am honoured to have been chosen as an ambassador for Psychologies Magazine so I thought for a first blog it would be fitting to tell my story.  I shall get started...

I was always very sporty at school and wanted to be a Physiotherapist from my early teens.  I wanted to work with sports teams and I decided it was my dream job.  However things were not to be as at 15 years of age I was told in no uncertain terms, during a careers evening, by a teacher that shall remain unnamed that I "was not clever enough".  At the time I took what that teacher said as the truth and I gave up my ambition on the spot.  I believed what I was told and I have to own up that it took years to get over that tag that I held onto  that "I was not clever enough".

Over the years I did many jobs but never found my niche so over 15 years later when my kids started nursery school, I decided to retrain as a massage therapist.  I worked hard and it just so happened that one of my lecturers was an Osteopath.  I was hooked, that was what I wanted to be but I still held onto the tag of "not being clever enough".  My tutor encouraged me to go for an interview for a place on the full time 4 year degree course.

Amazed I was offered an unconditional offer on the spot.  I didn't have the entry qualifications but they saw something in me.  From then there was no holding me back.  I excelled at my studies, finally finding something that I was "good" at.  I WAS clever enough and graduated in 2003 with a degree in Osteopathic Medicine.  Not only was I clever enough but I immediately got asked to go back and teach on the degree course and I carried on to get my teaching qualifications.

The story about my teaching is a long one and perhaps to be told another day but just to say that since I have gone on to be a well known lecturer both at home and abroad, the vice principal of a newly founded Osteopathic course and an external examiner for colleges out in Milan and Ghent.  As I said that is another story.  I would however like to say  "I was clever enough.....!!!!! to that unnamed teacher.  (lesson to be learnt - remember how powerful words your words can be, use them carefully)

The year I graduated 2003, I found myself a newly divorced Mum of two young children, no divorce pay off (£0 in the bank), in fact no child maintenance at all - ever!.  Just me, a new qualification and bills to pay.  I set up a clinic out of my dentists surgery and did the classic marketing technique of "sit, wait and hope"  It soon became clear that although I had had huge amounts of training on how to be an Osteopath I had very little idea of how to run a business and certainly no idea how to get more clients.

This time in my life was when I hit rock bottom.  I had moved into a rented flat with 2 bedrooms (1 each for my children).  I didn't have enough money for a cooker instead a small microwave a friend had given me.  I didn't have money for a fridge, instead I had a bucket of water to keep milk chilled.  I didn't even have a bedroom, instead a pull down bed that was kept behind the sofa.  At that time I did a lot of crying.  I was working in my clinic, trying to build up my client list (it was slow), I was working in the evenings as a rehab assistant, putting people to bed and trying but failing to make ends meet.  Once the children had gone to bed, for months, I sat on the sofa and sobbed. I was totally unsure how to get my business profitable.

Move on 15 years and I am now the owner of a large multi-healthcare clinic that has won multiple awards including Clinic of the year on 4 occasions. I have 19 practitioners that work out of my clinic and 5 reception staff.  My clinic is nearly 8 years old and very successful with a great reputation in the local area.  I also own another online business where I work mentoring and coaching other therapists on how to run their own clinic. This year I won Business Person of The Year for my work in both areas. I lost 2 stone this year and I am the fittest 50 year old I know by eating/training smart and hard.  I live in a newly extended 4 bedroom house with my fabulous partner and my kids are well rounded young adults who make me so proud every day.  Yes my life has changed!!  I really was clever enough!!

I got here from hard work.  I took time out to learn business, realising that I needed more than my Osteopathic and massage qualifications to succeed.  Once I understood business I found success.  I don't believe in luck so no I have not been lucky (watch out for my book I am writing all about this) instead I have always worked hard, I NEVER give up and know there is always a way to reach your dreams if you want them enough.

Never believe what people say to you if they say negative things.  If you want it enough you can achieve anything you want to.  I was told at 15 that I was not clever enough.  What if I had listened?  What if I had held onto that view for the rest of my life? Instead I realised that I may not be an academic but if I find something I love and can truly understand - I am AWESOME!  I have tonnes of common sense, I am an action taker and now I get to help people do the same in their own business.

What dreams do you have and how will you achieve them? 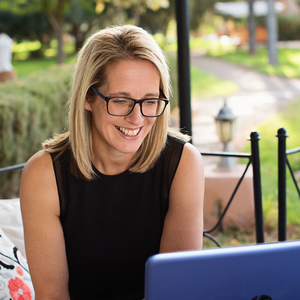 Cara Wheatley-McGrain
over 3 years ago

Inspirational story, thank you for sharing!

Gaelle Berruel
A Special Invite For You
Psychologies Ambassadors , Self, The Happiness Club , The Great Wake Up, How To Achieve Your Goals, Money

Gaelle Berruel
The First Steps To Escape Your 9-5
Psychologies Ambassadors , Self, The Great Wake Up, How To Achieve Your Goals

The First Steps To Escape Your 9-5

Gaelle Berruel
Connect With Your Divine Guidance And Angelic Support
Psychologies Ambassadors , Self, How To Achieve Your Goals

Connect With Your Divine Guidance And Angelic Support