Brought to you by Psychologies
The Great Wake Up

week thirty two in 'wake up'

This week’s challenge was to fly a paper aeroplane and I thought it was a superb idea. Why? Because it’s fun, that’s why. Furthermore I knew exactly where I would be flying one from – the top of the Malvern Hills. Off we went…

The thought of flying a paper aeroplane took me back to the time when I was more in tune with my imagination, when it was wild. When I used to invent my own board games and film scenario’s, when I used to draw a lot and play more. With the advent of adulthood and finding a space in the that world of conformity my imagination took a back seat while I carved out something of my own to help me stand on my own two feet – growing up in the ‘real’ world.

Just like the climbing a tree experiment this reminded me that it’s only ourselves that hold our imagination back from free flow. We tell ourselves, “That’s kid’s stuff.” And yet we deny ourselves a splash into the world of imagination and fun.

My splash into the imagination helped me colour my aeroplane and inscribe it.

(my second in command the great Bobby Cuddy)

Finding a great place on the Malvern Hills me, Sarah and Bobby watched our aeroplane fly high (there is a video to be posted soon).

I don’t know if I’ll fly a paper aeroplane again but for those couple of days in week thirty two of ‘wake up’ it was fun, a link back to good times and certainly a time for imagination. It was another experiment in finding fun and freeing ourselves from that thing that calls itself autopilot. 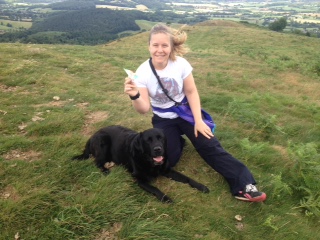 Jacqui
over 5 years ago
It sounds like you all had great fun and I love the aeroplane decoration!

Vanessa
over 5 years ago
Nice to have you back showing the way, Captain! Love the decorations and your enthusiasm is such an inspiration!

Mark Cuddy
over 5 years ago
Thank you Vanessa and Jacqui. we have landed. It was great fun today. The best thing about 'wake up' is knowing that the best things in life are free. Take it easy or as my best TV detective always said; "Who loves you baby?" Share the love! Take it easy from the dude/man!

Fiona Dolben
over 5 years ago
Love this joyful post! I too wrote on my plane but in not such a fun way as yourself. By the way Bobster is absolutely gorgeous so soulful. :)

Mark Cuddy
over 5 years ago
Cheers Fi, the Bobster is defo a one off!

Verónica Moreno
Releasing Old Stories | Shamanic Journey | Finding Wisdom & Gratitude in our Stories
Barefoot Coaches' Channel , Self, Sex, How To Save Your Relationship, 360me, The Happiness Club , The Great Wake Up, Work, How To Achieve Your Goals, Money, Family & Relationships

Verónica Moreno
Theta Healing Meditation for SELF-LOVE | Healing the Baby in the Womb | Empowering downloads
Barefoot Coaches' Channel , Self, How To Save Your Relationship, 360me, The Happiness Club , The Great Wake Up, Family & Relationships